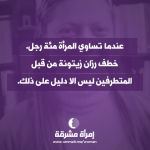 Ibrahim al-Assil is a Syrian political analyst and civil society activist who serves as a resident fellow at the Middle East Institute. He is also a director at the Orient Research Center-DC Office. His work focuses on the Syrian conflict with an emphasis on different aspects of security, civil society, political Islam, and political economy. Al-Assil is the president and a co-founder of the Syrian Nonviolence Movement, an NGO formed in 2011 to promote peaceful struggle and civil resistance as a way to achieve social, cultural, and political change in Syrian government and END_OF_DOCUMENT_TOKEN_TO_BE_REPLACED
This entry was posted on Wednesday, December 11th, 2013 at 10:47 pm and tagged with ناظم الحمادي, وائل حمادة, اختطاف رزان زيتونة, دوما, رزان زيتونة, سميرة خليل and posted in عام. You can follow any responses to this entry through the RSS 2.0 feed.
« آراء ساعة استشهاد الصالح
Documenting the abduction or Razan Zaitouneh and her fellows »